Mauryas were the first dynasty to rule over a unified India. Chandragupta Maurya was the first emperor of India. He created one of the largest empire of his time and no other king of India after him (barring his own grandson) could rule over a land of that stretch.

His kingdom ranked third among the list of ancient empires with a population of 68 million.
To give a background on the story of Chandragupta Maurya, let me talk about Magadha a bit. Kingdom of Magadha in central eastern India was ruled by Nanda dynasty in around 340 BC. This was the third powerful dynasty in the northern Indian region ruling Magadha after the times of Mahabharata. Before this dynasty, a dynasty named Shishunga used to rule the kingdom of Magadha. The last king of Shishunga dynasty had many sons. One of them from a Shudra woman named MahaPadma Nanda. As per the society following Vedic lifestyle that time, shudras were considered those with humble origin. MahaPadma Nanda was a powerful contender of the the throne of Magadha but he was despised by his half brothers. Later MahaPadma Nanda killed all of his half brothers and became the sovereign ruler of Magadha and later by defeating the different dynasties ruling the other northern and north western regions and formed the biggest kingdom of that time on the Indian land.

Since Nandas were believed to be of humble origin, the growth of MahaPadma Nanda was seen as beginning of Kali Yuga (the age where impurity will grow). This was indeed manifested by Nanda's son, Dhana Nanda who, as per various records, was corrupt and cruel ruler.

The story of Chandragupta what we know of today is mostly attributed to western historians and some contradictory pointers mentioned in our puranas.Many sources claim that Chandragupta was related to the Nanda dynasty and was one with low birth. But since, Nandas themselves are considered as shudras, we can believe that Chandragupta was born in a family or to a mother who was at a social level even below among the shudras.
Greek historians also mention about Chandragupta with the name "Sandracottos" or "Andracottus". It is said that at a younger age, he was spotted and later recruited by a learned brahmin named Chanakya. Chanakya, who was a professor in Taxila, the ancient university in Gandhar, then trained Chandragupta. It was common desire of both Chanakya and Chandragupta to usurp the kingdom of Magadha from Dhana Nanda though their intentions were far beyond Magadha. They wanted to have a kingdom stretching from Gandhar to Anga (present West Bengal) and wide and strong to oppose any foreign attack.

Dhana Nanda had a massive army at his disposal in Magadha. The sheer size of the army was enough to scare the soldiers of the mighty Alexander.
It is said that Alexander left India after conquering north western kingdoms and without entering Magadha. Before leaving he appointed his satraps (perfects) Phillips and Eudemes for the territories he had won.

After Alexander's departure, Chandragupta with the advice of Chanakya attacked the satraps of Alexander and played part in the killings of Nicanor and Phillip. Upon Alexander's death later, he focused on Magadha and after making powerful army out of north western kingdoms raged war against  Dhana Nanda. After series of battle with Dhana Nanda and his commader Bhadrasala, he finally was managed to defeat and kill Dhana Nanada in 321 BC and took over Magadha.
Thus Chandragupta formed a great and strong kingdom. His empire extended from Bengal and Assam in the east, to Afghanistan and Balochistan, eastern and south-east Iran in the west, to Kashmir in the north, and to the Deccan Plateau in the south.

But forming such a big kingdom is not an end of it. You also have to protect and administer it. Seleucus I Nictar, a Macedonian satrap of Alexander came to reclaim the lost lands. He had a great battle with Chandragupta but was defeated. Seleucus gave his daughter in marriage to Chandragupta and formed an alliance. Chandragupta too, in gesture of friendship, gave some elephant troops to Seleucus. Seleucus sent an ambassador Megasthenes to Chandragupta. The later records of Megasthenes tell us the wealthy lifestyle of Magadhans at that time.

Chandragupta with his excellent administrative skills undertook major political and economic reforms. Due to strong military position, there was stability and trade thrived. There was an all round development in India in fields of economics, art, culture, trade, productivity, etc.
He had a son named Bindusara, whom he ascended to throne in 298 BC. 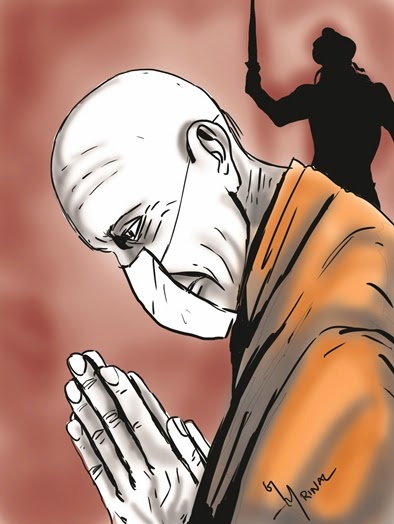 At the age of 42, Chandragupta felt inclined to Jainism and became a disciple to a Jain monk Bhdrabahu. He went in forest and led his remaining life as a Jain saint. He left his mortal body at Shravan Belagola in Karnataka. The place where he died is called Chandragupta Basadi.


The personality of Chandragupta Maurya is amazing. Though he has been drawn by many artists and has been portrayed by many actors in various adaptations based on his life, one thing that always stands out when I think of him is that he was a great visionary and a great achiever. Imagine he was quite young when he captured those kingdoms and he became the first emperor of unified India at a very young age.
I also tried to sketch him by putting a trademark peacock feather on his turban which is popularly associated with his image linking the word 'Maurya' derived from Mayura (peacock).

Indian Government honored Chandragupta by issuing a postal stamp in his name in 2001. He was the first hero of India as per recorded history and indeed was a legend and I salute him.